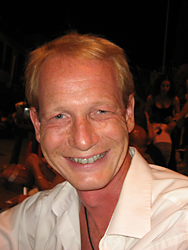 Rico Besserdich, the author of “Song of Silence – A Book About Water” is an independent professional photographer, artist and visual philosopher specialized on “Aquatic Imaging”, the art of imaging utilizing water as the key element of expression. In 2011 he was awarded World Champion of Underwater Photography and his images were published and featured hundreds of times in magazines and books all around the world. His mission to raise awareness for the importance of water earned him recognition by the NOBEL Organisation, the United Nations, the Swedish Parliament, among others. In 2018 he celebrates his 40th anniversary of being involved in photographic arts.

The past eight years has seen his work exhibited in nine photography art exhibitions. In 2015, he wrote two books about underwater photography for a German dive training agency. In the year 2014 he was a lecturer for artistic underwater photography at the SAAR Academy of Fine Arts, Germany. A full list of Rico’s references is available on his official website www.maviphoto.com .

A word from the author: ‘The first time I used a camera was in summer 1978. My first camera was a “Weltaflex” (built 1954), an East-German copy of the popular “Rolleiflex”, 12 images per roll of film. I learned the basics of photography and developed my black&white medium format images in the darkroom. I have been hooked on the art of photography since. In 1996 I discovered scuba-diving, became a scuba-diving instructor in 2000 and began to shoot images underwater. I have explored the oceans from the surface down to 260 feet, always on the hunt for significant subjects, situations and images.

Over the years my artwork has become more and more focused on the element of water itself. My goal has become more refined, to create images that go beyond classic underwater photography. The element of water alters our vision and impressions. Known forms transition into new, unique and often startling creations, often beyond our expectations. Whether it is an entire ocean, a lake, a river, a pond or a single drop of water, the essence of liquid is transformative. It is the search for images that express the endlessly fascinating facets and beauty of the element that unites all living beings on planet Earth, water.’